mymmeryloss said:
Those taillights are the same as em1 tails... ^^^
Click to expand...

Registered VIP
Registered OG
5+ Year Member
10+ Year Member
looks like you're making good progress
I haven't been able to drive any of my cars up a car ramp like that for years!

Registered VIP
5+ Year Member
I like the hubcaps, I wanted to media blast mine and leave it but I don't know anyone in Tampa that has one I can borrow for free

TokyoSkies said:
I thought he tinted the stock 97 tails, didn't he? The 99-00 tails are the ones that are red and white, yeah?
Click to expand...

That's what I thought. I know my parts lol.

I'm iffy on the tint, but it's something that will just take either work or money to fix. Again, they're under a hundred dollars away from a complete replacement. Not cheap for me, but doable.

On the hubcaps:
I didn't finish them with the red H like I wanted, so they got packed away when I went to college. The last week of the semester I brought them on campus and painted them again in one of the art dept.'s painting booths. They aren't perfect but idk if I'd like them glossy better after all, and they've been growing on me the past few weeks

It'll probably come down to whether they stand up well to wear and washing. 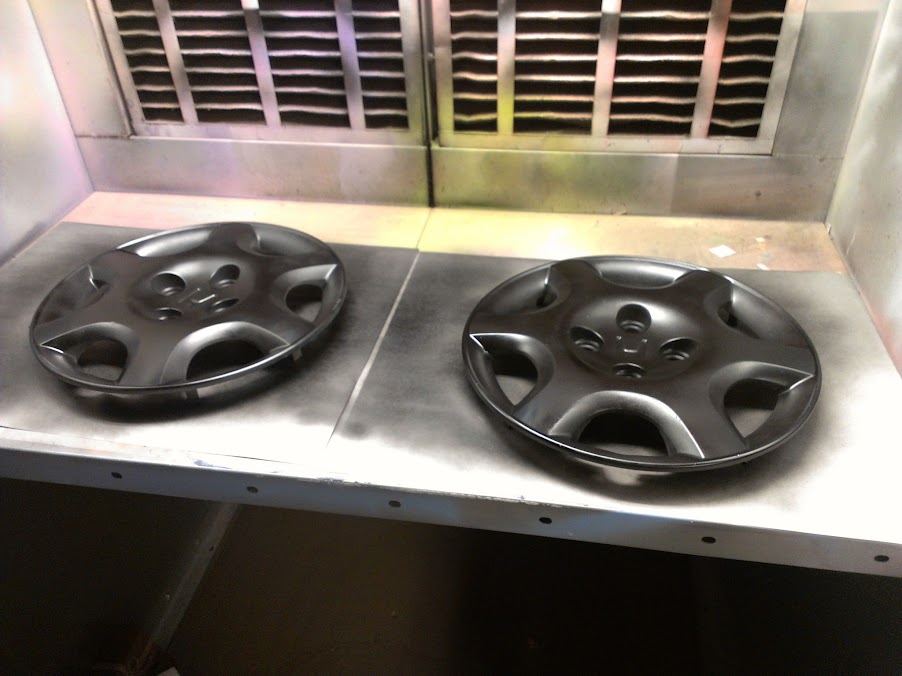 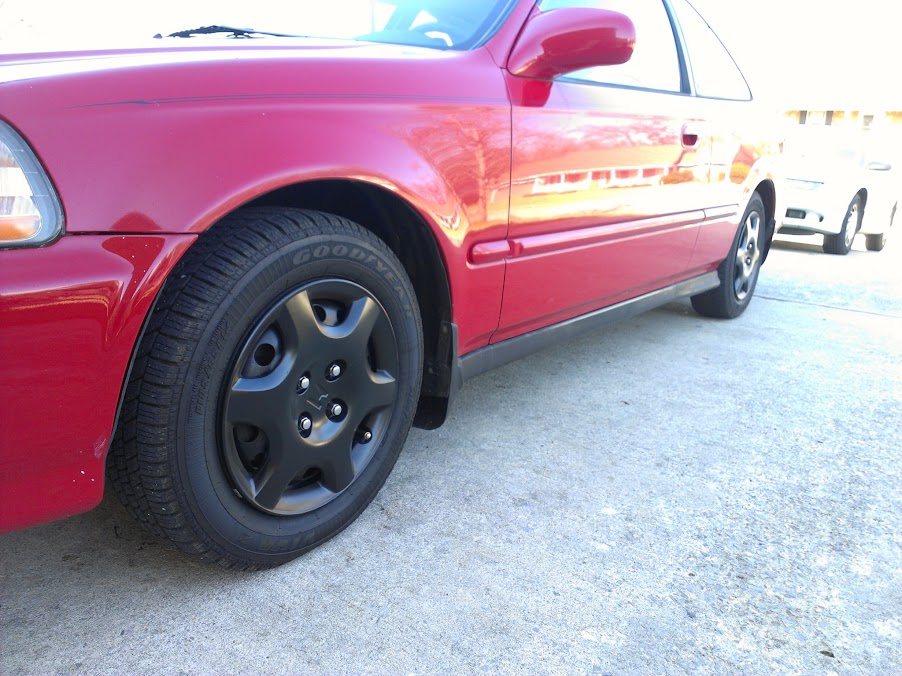 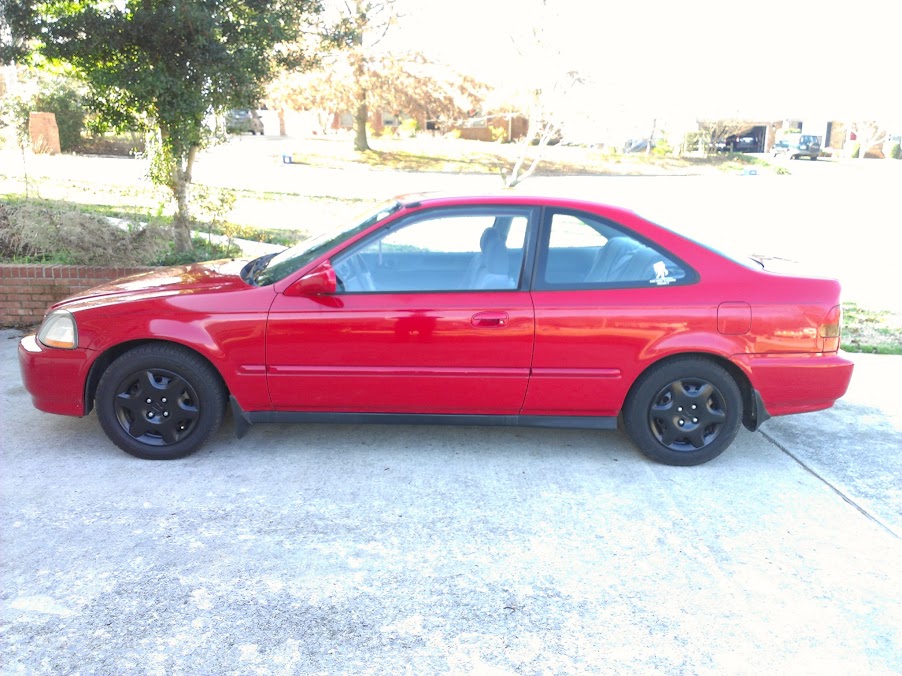 Added for mymmeryloss, the hubcaps were beaten to heck and back. I probably sanded a quarter of their mass off to get rid of most of the divets and scrapes.

Registered VIP
5+ Year Member
10+ Year Member
Alright, a few months ago, a friend of mine brought over his DSLR and took some pictures of my car. Unfortunately, the color settings were off xD so it looks orange... 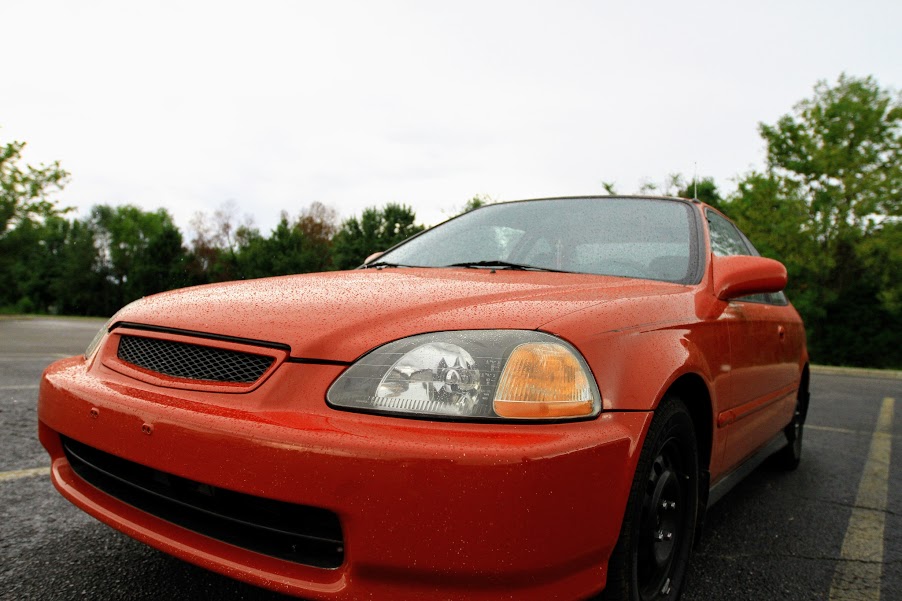 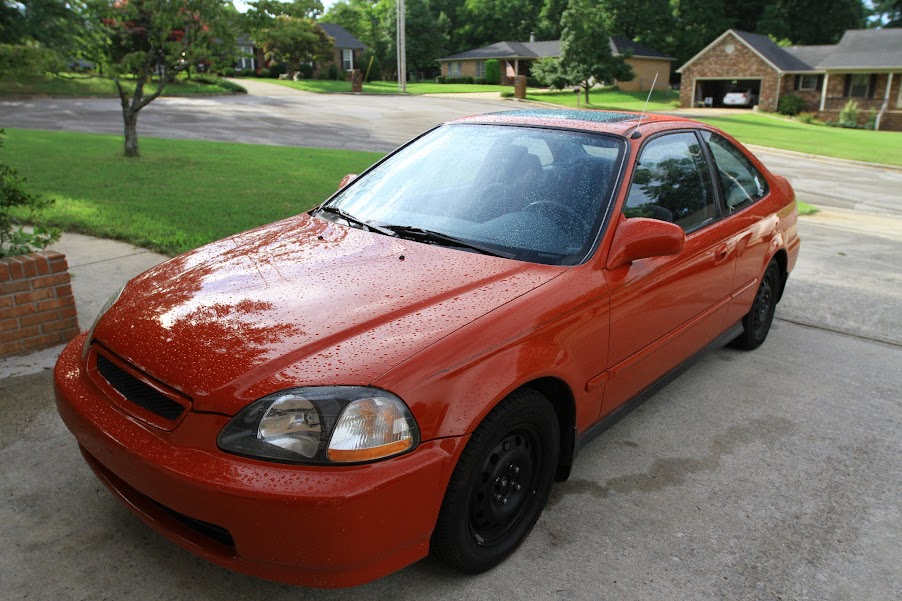 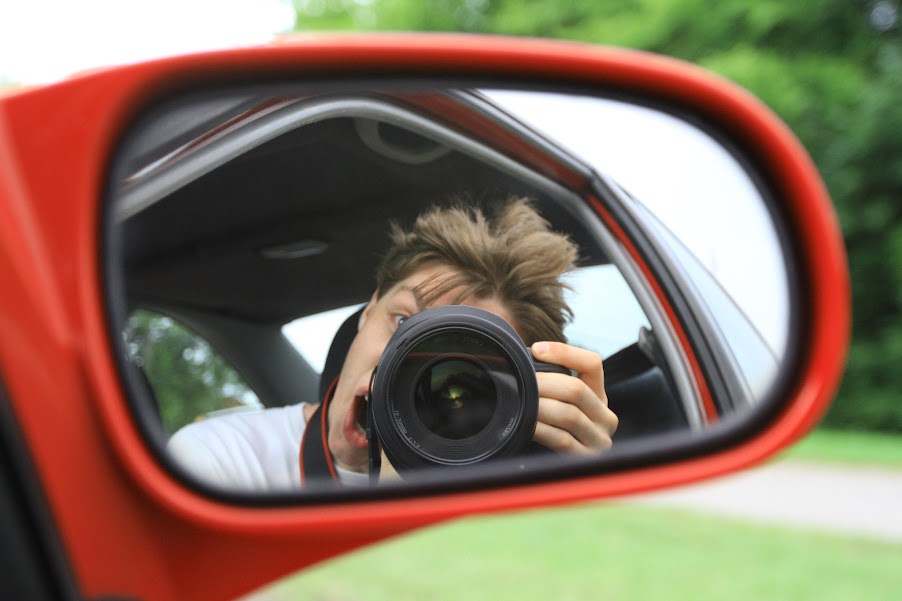 I don't have any real military affiliations, but everyone should have one of these. 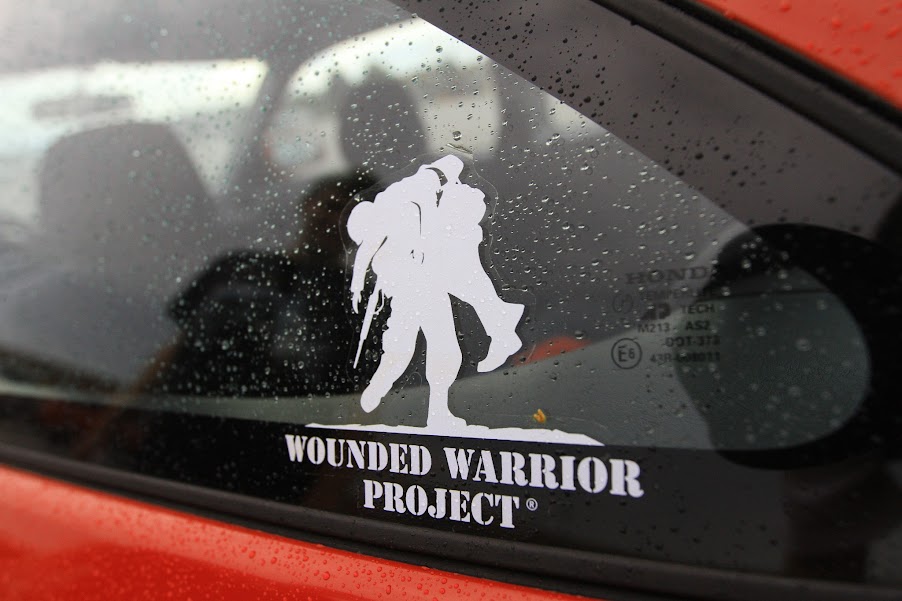 BigBubbaX said:
I don't have any real military affiliations, but everyone should have one of these.

Okay, I think this is it. Until I get some money/time to do more work, the car is taking second place to school

A while back my dad borrowed my car, and returned it with the driver's side window "broken". Not cracked, but it no longer went all the way up.

I removed the trim and plastic dirt shield. 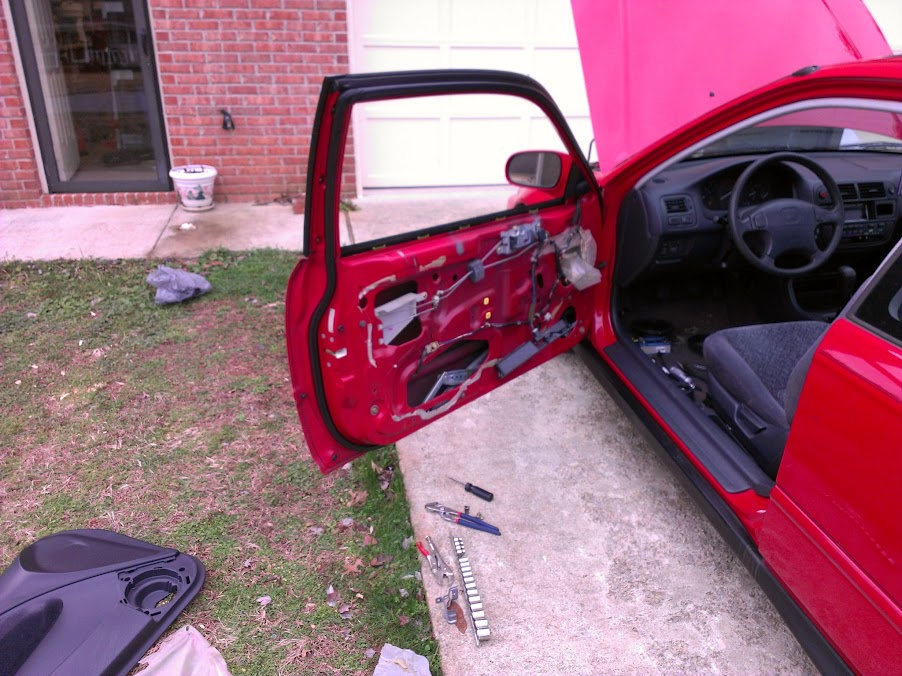 Pulled out the window and broken motor system. 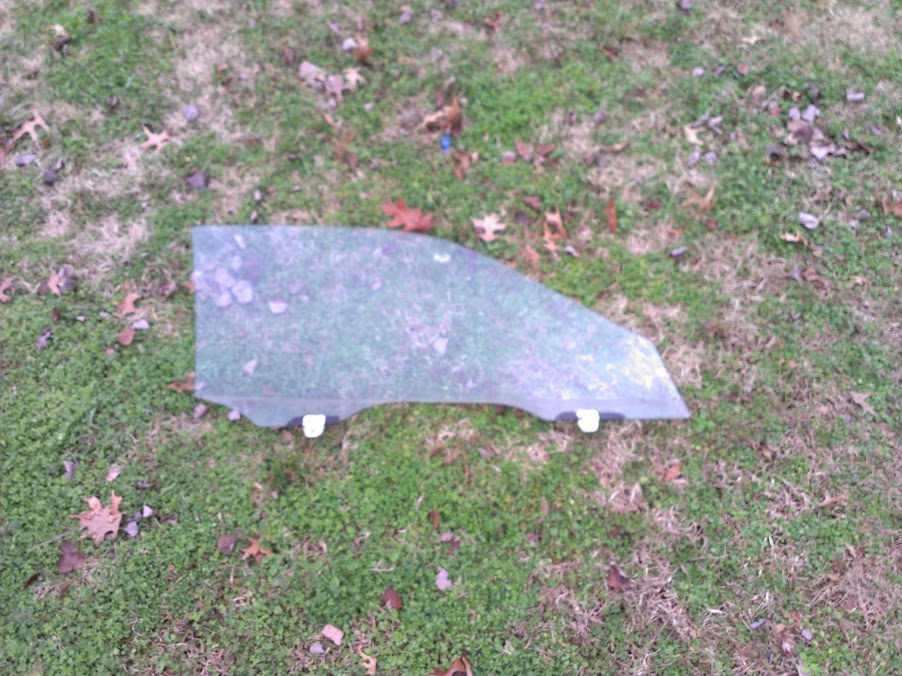 Then I replaced the window and propped it up with a piece of PVC. I didn't want to use a plastic bag, or even make it obvious that the window was dysfunctional to prevent someone trying to break in or whatnot. 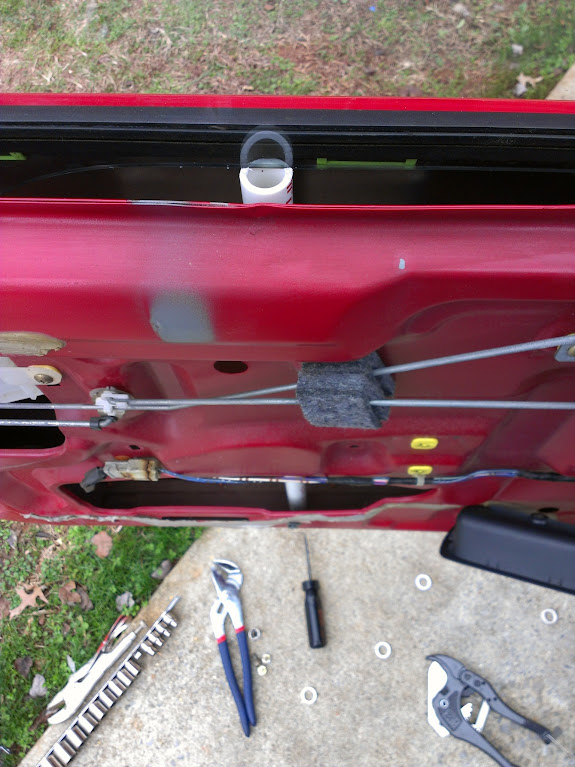 Fixing/replacing the motor assembly will have to wait x( 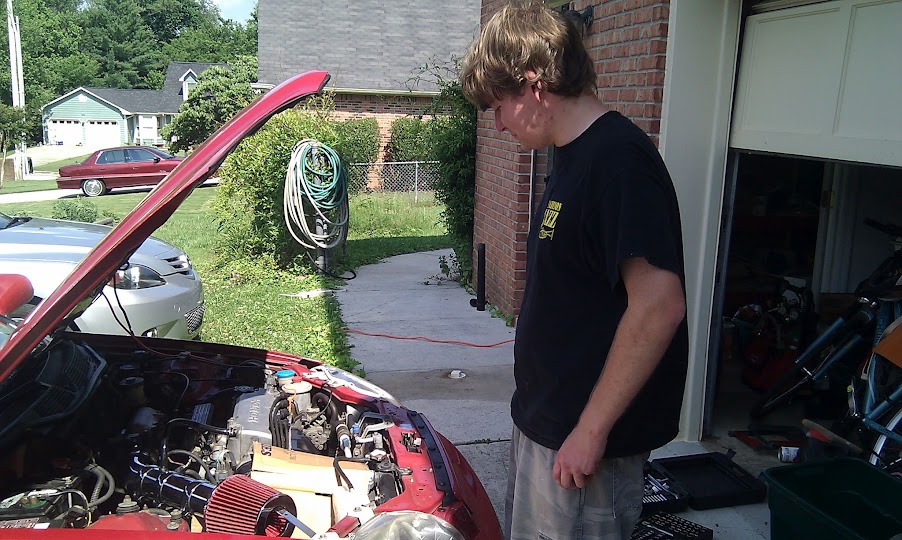 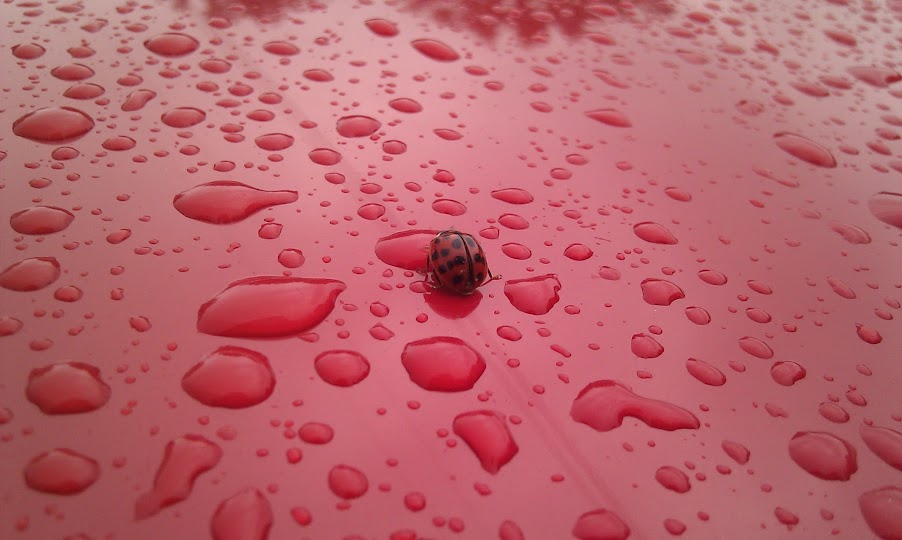 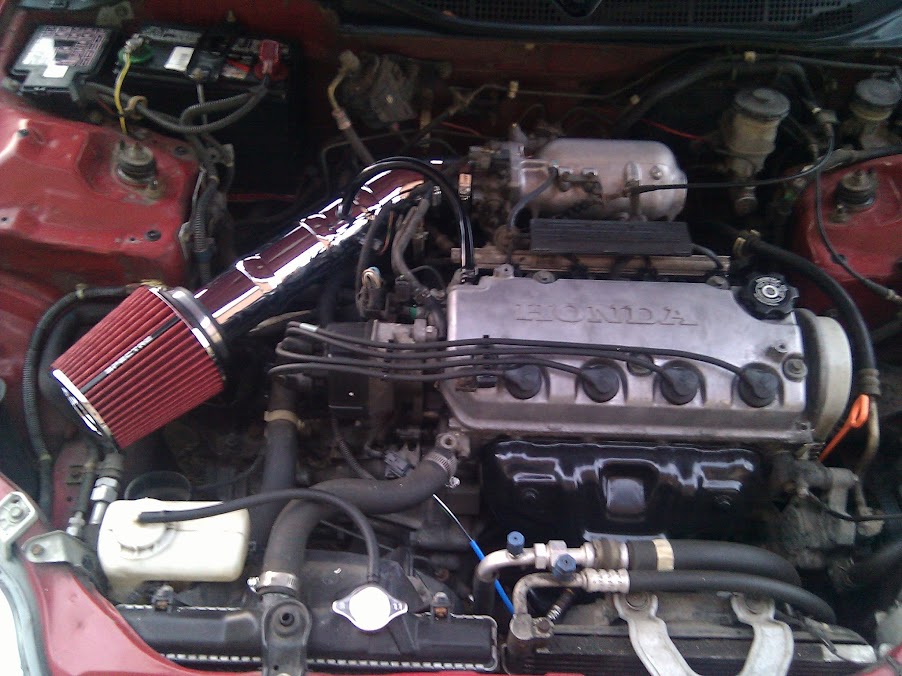 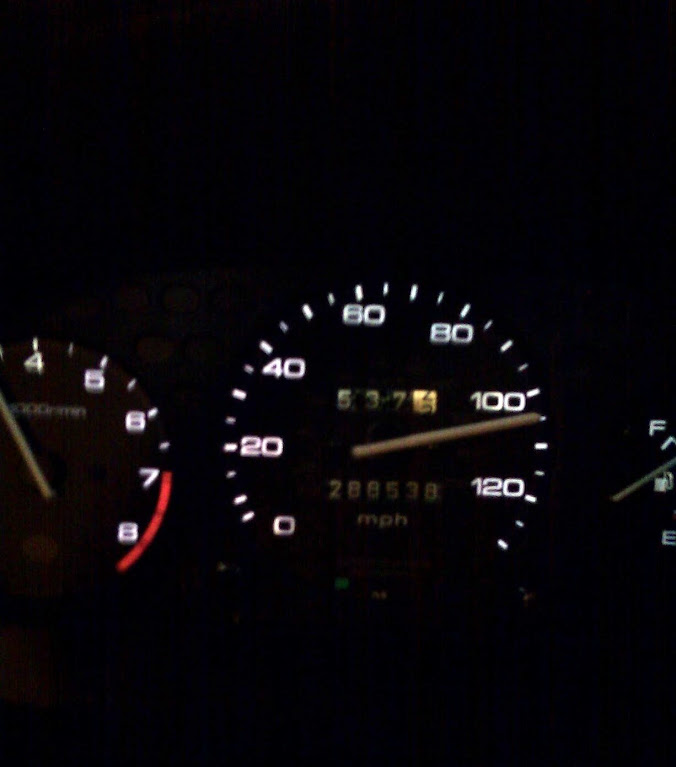 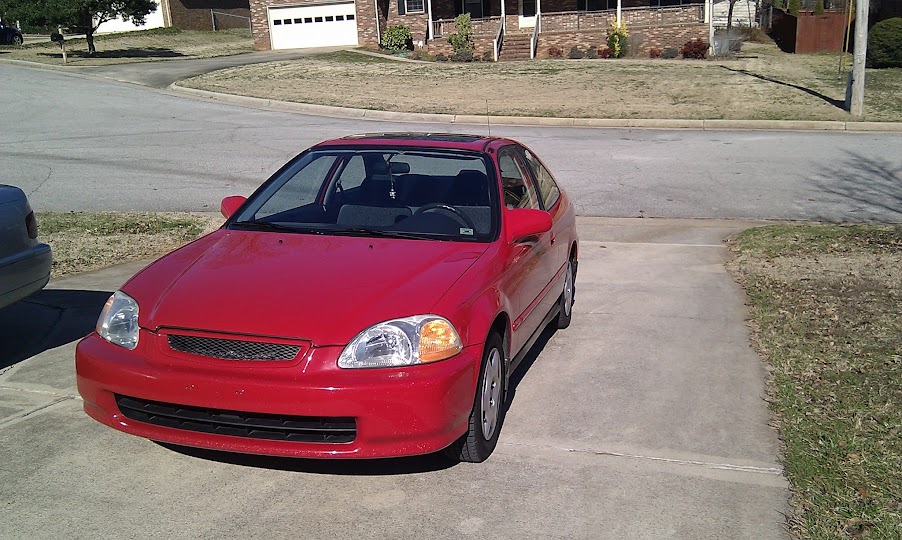 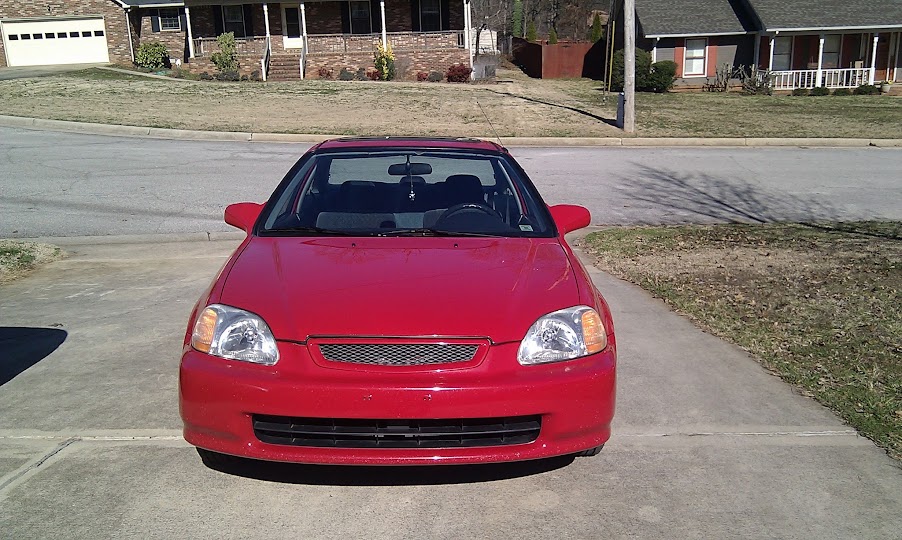 :-\ This picture makes me almost miss the 'old' headlights xP 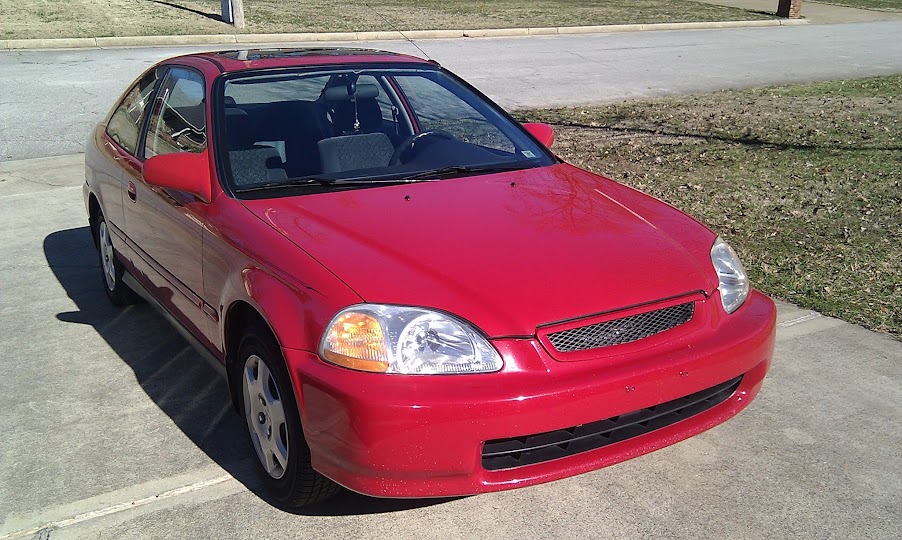 Sorry if I'm bothering people with a useless update.

I got the car aligned a few days ago. I have no idea how to read the report, although I understand what the terms 'toe' and 'camber' are. 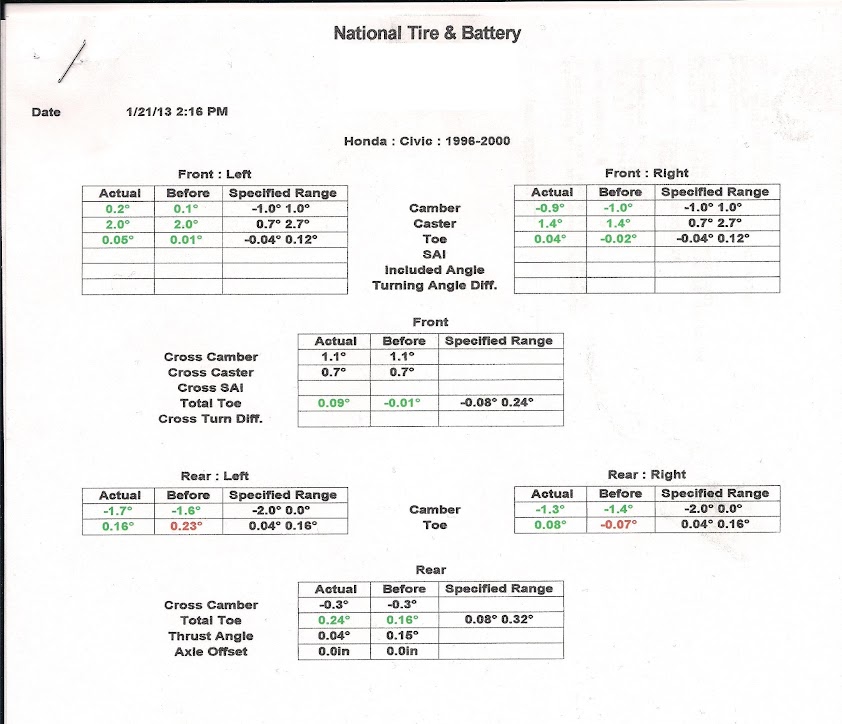 The biggest change since my last post is finances. I've secured a job doing research for my campus! Unfortunately, my dad also lost his job the same month due to whatever-the-hells-going-on-with-the-government. So my first priority is saving up enough to pay for my next semester of college, then save up a little reserve, then take care of my car.

I'm going to start working on a price list of things the Mothership needs, such as I either need to learn how to rebuild the transmission, or save up enough to buy another one, because it's currently not going to last long x(

The first half of spring break was too cold to do much, and the second half I've been sick -_- I did take some time today to clean the steering wheel and shift knob though, and good thing too! I used a mix of a little hand soap and a little laundry detergent in warm water and scrubbed everything down. 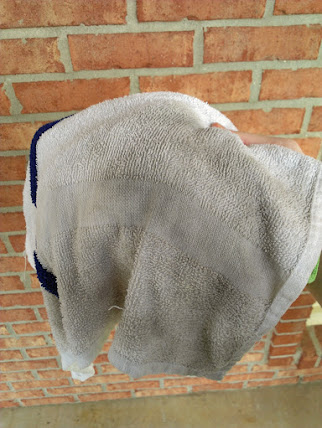 Recap since spring break:
- Driver side window is still broken. More on that in a sec.
- Maintenance: I've cleaned, sanded, and sealed the headlights again.
- I've started working at my new job, just got (and spent) my second paycheck.
- I want to do engine/tran upkeep this summer, but don't know how and am afraid of going it alone.

Money's still an issue. I've found myself without a laptop and cellphone, so my next couple months of income are dedicated to replacing those.

It's about to get hot here in Alabama (thankfully it's been strangely cold though). I need to fix the window.
I believe that I can fix the window regulator gears with an Oxy torch, grinder, and dremel; but my torch is out of commission and has been for a year now... I'm considering buying an eBay replacement (window arm/gears) and just swapping the motor over.

I'm working on plans to install a custom built car computer. If I go through with it, this thread is going to get geeky, sorry.

I also want to remove the rear seats and install a plywood box that will extend the trunk up into the cab. Hoping to get this one fully finished over the summer break.

The transmission is giving me some small trouble; starting to grind again like it did before I refilled with Synchromesh. I can't for the life of me find genuine Honda MTF anywhere except ebay... And I don't want to buy it from some random guy on ebay :'(

Now I'm off to read and start threads while I try to figure out what's involved in replacing the clutch on my car.

ALSO:
I'm not sure if I've mentioned this yet, but the previous picture of the speedometer. Yeah, it's broken, the car was sitting still. Hence a building a car computer.


Sent from my iPhone using Tapatalk

Registered VIP
5+ Year Member
10+ Year Member
At the expense of sounding pretty dumb, I've never been to a Honda dealership, and would kinda rather keep it that way.

Point taken though, I'll find out where my closest dealer is and go ask if they have mtf.

they can be a pain, but they can also be your best friend. There are certain parts that are Honda specific that you can only get through the dealer or online, like vtec solenoid gaskets for example.


Sent from my iPhone using Tapatalk

Sent from my Nexus 7 using Tapatalk 2
You must log in or register to reply here.